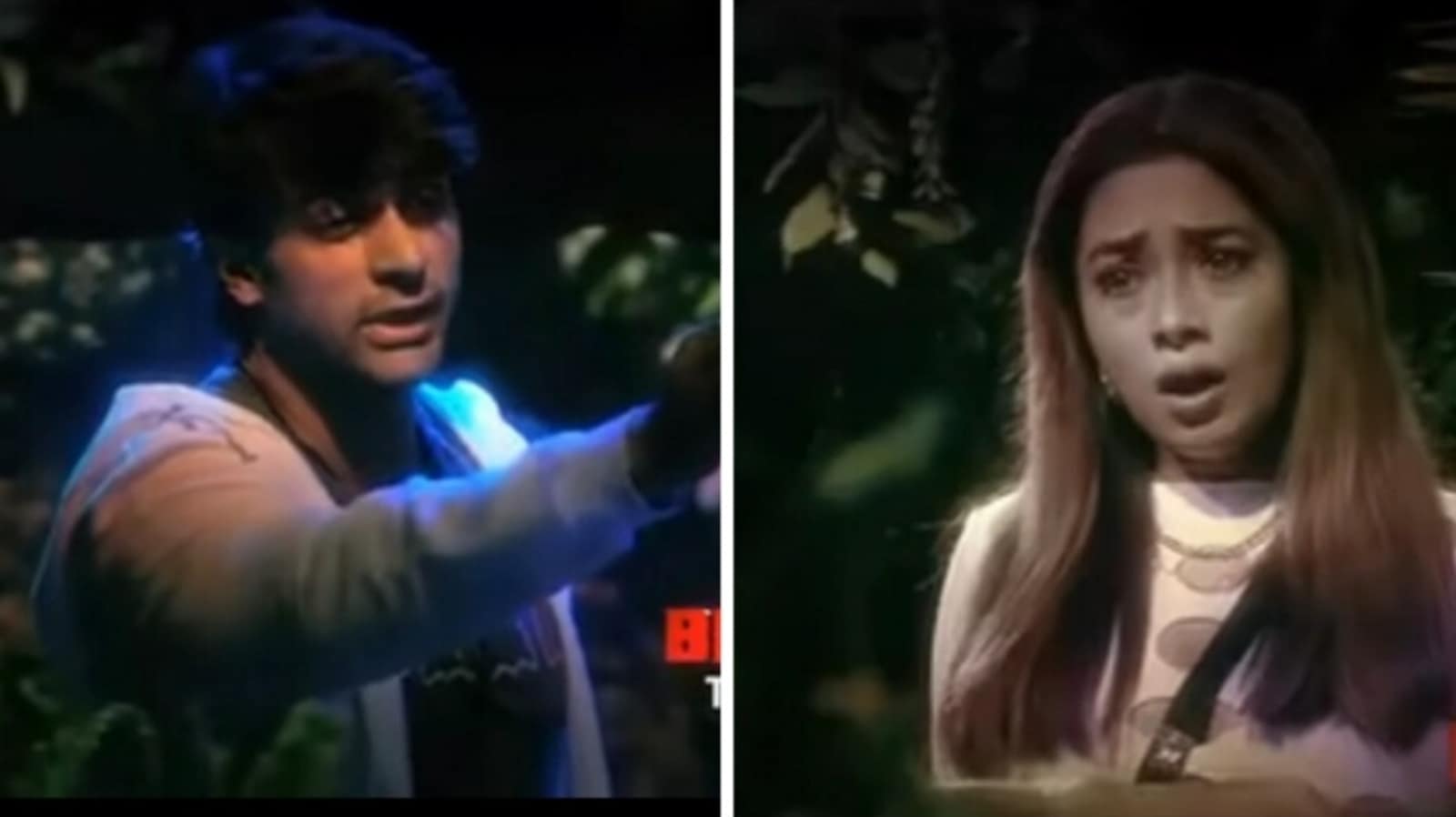 Bigg Boss will be seen giving the nomination task to the housemates in the upcoming episode. The inmates are supposed to pick two stones and keep them in front of the artificial crows. They are asked to give two names each for this week’s eviction. The upcoming promo shows Nimrit Kaur Ahluwalia nominating Tina Datta and Sumbul Touqueer Khan nominating Priyanka Choudhary. Shalin Bhanot also nominates Tina, and calls her ‘fake and buri aurat.’ (Also read: Salman Khan says Tina Datta finds only Shalin Bhanot ‘chipakne ke layak’, Shalin tells him ‘please don’t be harsh’)

ColorsTv shared the promo on their social media handles with the caption, “Nomination Special mein dekhiye contestants ki yeh dasha (Look at the condition of contestants during nomination special episode).”

The promo opened with Nimrit, who can be heard saying, “Mai jisse nominate karna chahungi woh hai Tina (The person I would like to nominate is Tina)”, and threw a stone in the circular box in front of the crow. Then, Sumbul took Priyanka’s name, and said, “Priyanka, Insaan ke aansoon ko uski kamzoori mat samjhna (Don’t consider a person’s tears their weakness).” Priyanka immediately said, “Ye filmy dialogue maarne se kuch nhi hoga (Don’t say these filmy dialogues, nothing will happen).” Sumbul tried to come closer to her, and fell down.

Then, Shalin can be heard saying to Tina, “Mujhe bohot fake lagti hai (I really think she is a very fake person).” She said, “Ab tak toh bolte the, ki tum fake nhi lagti ho (Earlier, you used to say I’m not a fake person).” “Aap itni buri aurat hai, I hate you Tina Datta (You are such a bad person, I hate your)”, he added. She replied, “Awww” and made a ‘yes’ gesture with her hand.

Bigg Boss 16 airs Monday to Friday at 10pm, and on Saturday and Sunday at 9pm on ColorsTV. The show is hosted by Salman Khan. Tina Datta and Shalin Bhanot have remained the talk of the town in this season for their ugly fights, friendship and love story.

Raveena Tandon wants to highlight women security at W20: Our laws are supportive towards women, but often, they don’t get implemented | Bollywood

Shahid Kapoor took to Instagram and shared a video featuring wife Mira Rajput and actor-brother Ishaan Khatter on Monday. He sent big boxes filled with gifts for the two. However, Mira and Ishaan were left disappointed after unboxing their parcels. Shahid sent ‘fake flowers’ to Mira, while Ishaan received ‘artificial cookies’. Mira called her husband’s act ‘cheap’ and Ishaan said he’s having ‘trust issues’ with his brother. Many fans reacted to Shahid’s promotional video for his upcoming series Farzi. (Also read: Shahid Kapoor shows off his massive helmet collection, calls them ‘my ladies’; fans want to know Mira Rajput’s reaction)

In the beginning the video, Mira said, “Hi guys! I am Mira” and Ishaan, said, “And I’m Ishaan.” Mira was then heard saying, “So Shahid’s been really sweet and sent us a whole bunch of gifts. So many gifts from such a busy schedule.” Ishaan said in happiness, “The sweetest brother.” Mira then said, “Oh flowers,” as she held them with a smile on her face. Her brother-in-law said to her, “Orchids, your favourite!” She then replied, “I love them!” She brought the flowers closer to her and smelt them. Ishaan then asked, “Kya hua (What happened)?” She then asked him, “Are they fake?” He said, “Plastic!!” She then said, “How cheap!” and threw away the bouquet of flowers. Ishaan laughed, and said, “Plastic flowers. He made you a fool. Well at least they will have a longer shelf life.”

Mira asked Ishaan, “What did he get you?” Ishaan picked up one of two small gift boxes and said, “Which one should I open?” He shouted, “Choco-chip cookies” and ate them. He had a weird reaction on his face. Mira asked him, “Fake?” He said, “Dhoka (Betrayal).” She consoled him, “It’s okay.” He spit out the cookies, and said, “Trust issues, is everything fake?” Mira showed her engagement ring, and asked, “Ye bhi nakli hai kya (Is it also fake)? The symbol of our love?” The two then shouted, “Shahid… bhai (brother).”

Shahid said, “Hi guys, why are you shouting?” An angry Mira said, “Just come here! What’s with all these fake gifts?” He said, “Fake gifts? Oh fake! guys it’s fake… I have nothing to do with this. This is Sunny.” Mira and Ishaan asked him ‘Who is Sunny?” Shahid said, “Well my new show, where I play Sunny! Farzi!”

Sharing the video on Instagram, Shahid wrote, “Farzi scenes [email protected] @mira.kapoor.” He used ‘Farzi on Prime’ as the hashtag. Reacting to the post, one of Shahid’s fans commented, “Bhai (brother) we are very excited for your show.” Another fan wrote, “Arey Shahid aap bohot funny ho aur Ishaan toh mashallah (Shahid you are very funny and Ishaan is amazing).” Other fan commented, “Make some noise for Farzi.”

Shahid will be next seen in web series, Farzi. It will stream from February 10 on Prime Video. 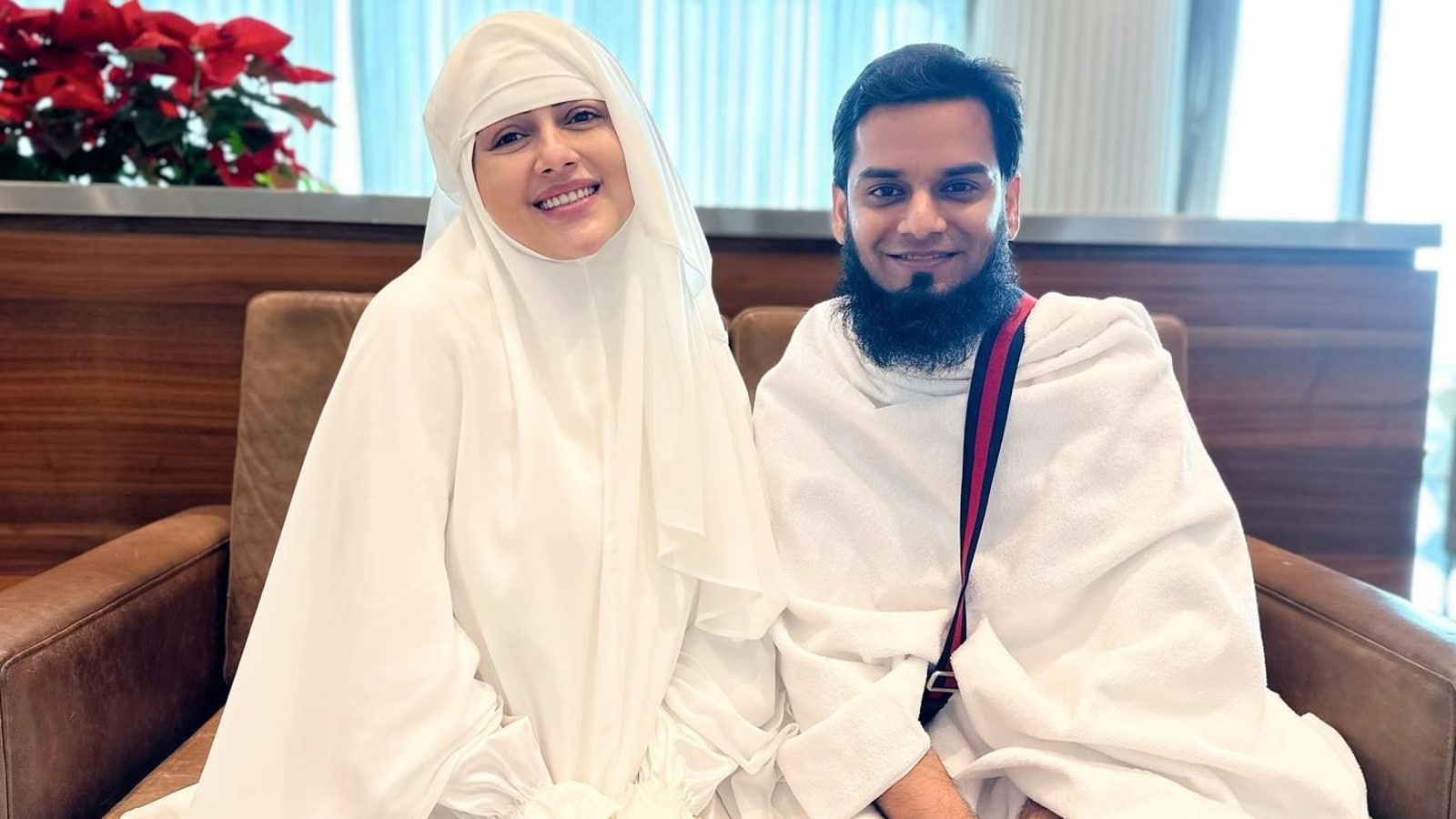 Former actor Sana Khan and her husband Anas Saiyad have shared new pictures as the couple travelled to perform Umrah. Taking to Instagram on Sunday, the duo shared a post revealing that ‘this umrah is very very special’. Moments after they shared the post, fans started speculating that they are set to embrace parenthood. (Also Read | Sana Khan reveals why she chose to wear hijab after depression)

In the first photo, the couple sat on a sofa in white outfits as they smiled for the camera. In the second picture, they were seen inside an aircraft. Seating next to each other, they smiled while posing for the lens. They captioned the post, “Alhamdullilah soooo Happy. This umrah is very very special for some reason which In Sha Allah I will share soon with all. May Allah make it easy.”

Reacting to the post, a fan commented, “May Allah bless you with a healthy child. MashAllah.” A comment read, “Alhamdulillah i think your both are going to be parents soon, in shaa Allah.” “You’re gonna be mother ??? Is that why this umrah is special?” a person wrote. “You are expecting ma shaa Allah ….i know it since 1month. Congratulations,” said another fan.

Last year, Sana and Anas visited Saudi Arabia for her first Hajj with her husband. On Instagram, Sana posed with Anas after they landed in Mecca. A part of her caption read, “Can’t wait to experience the most beautiful journey of my life of hajj with my @anas_saiyad20.” She also added the hashtags–Sana Khan, Anas Saiyad, Al khalid, Saudi Arabia, Hajj, 2022 and Alhamdulillah.

Sana had posted a video before flying to Mecca with Anas. She had said, “This is my first Hajj and you can see my eyes are swollen. I’m very very excited of course as this was my dream that God has fulfilled today… It’s amazing.” A part of her caption read, “Allah ka Ehsan (God’s grace). I don’t have words to express my feelings…Can’t wait to land there.”

Sana tied the knot with Anas in an intimate ceremony on November 20, 2020. They got married just a month after she announced her decision to quit acting. Celebrating their first wedding anniversary in 2021, Sana shared a picture of the couple along with a note on Instagram. Sana featured in several films such as Wajah Tum Ho and Jai Ho. She was also a contestant on Khatron Ke Khiladi 6. She also participated in reality shows including Bigg Boss 6 where she was a finalist. 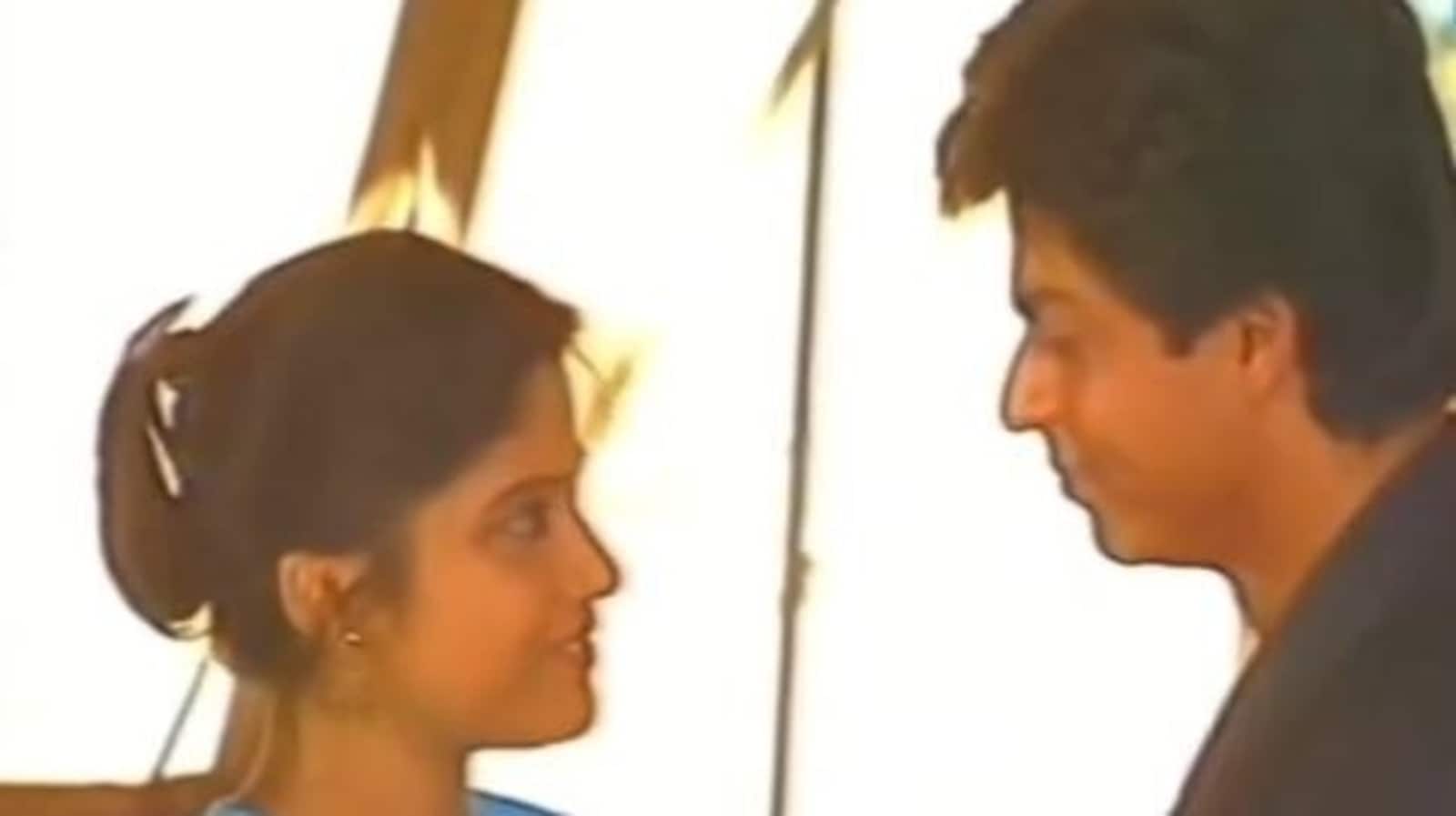 In the first photo, Ashutosh and Renuka sat inside a car as they wore ethnic outfits. The second selfie was seemingly clicked inside the theatre as the duo smiled and posed for the camera. She captioned the post, “Finally going to watch #Pathaan. Mausam bilkul sahi hai, kursi ki peti baandh li hai (The weather is good, have fastened the seat bealts). With Col Luthra ji.”

Ashutosh Rana plays the role of Colonel Sunil Luthra in Pathaan. A Twitter user asked Renuka, “You weren’t invited on premium (sic0? Why?” She replied, “Arey we were invited bhai but couldn’t go.”

Reacting to the post, Shah Rukh commented, “Col Luthraji ko bataya aapne ki aap meri pehli heroine hain (Did you tell Col Luthra that you are my first heroine)!! Or should we keep it a Top Secret otherwise he may fire me from the agency!!!” Shah Rukh and Renuka essayed Shekharan Rai and Maria respectively in the 1989 television series Circus.

Renuka responded, “Hahaha unsey koi baat chhupti kahaan hai? Aaphi ne unhe antaryaami kahaa hai. Aur chaahey jo ho jaaye, woh aapko fire nahi kar saktey kyunki jo kaam aap kartey hain woah koi aur nahi kar saktaa (Can anything be hidden from him? You only have called him all-knowing. And whatever might happen, he can’t fire you because nobody can do the work you do).”

In Pathaan, Shah Rukh essays the role of a RAW agent while Ashutosh is seen as RAW joint secretary, Colonel Luthra. Last month, during Shah Rukh’s AMA session on Twitter, a fan asked him to say something about Ashutosh. He had replied, “He is a Gyaani (intellectual) and Antaryaami (one who knows from within) apart from being a very very fine actor.” Renuka had responded, “You are unfailingly kind and generous and truthful,” along with smileys and hands joined together emoji.

Helmed by Siddharth Anand, Pathaan also stars Deepika Padukone as a cop and John Abraham plays an antagonist in the film. Apart from them, the film also stars Dimple Kapadia. The spy thriller released in theatres worldwide on January 25.