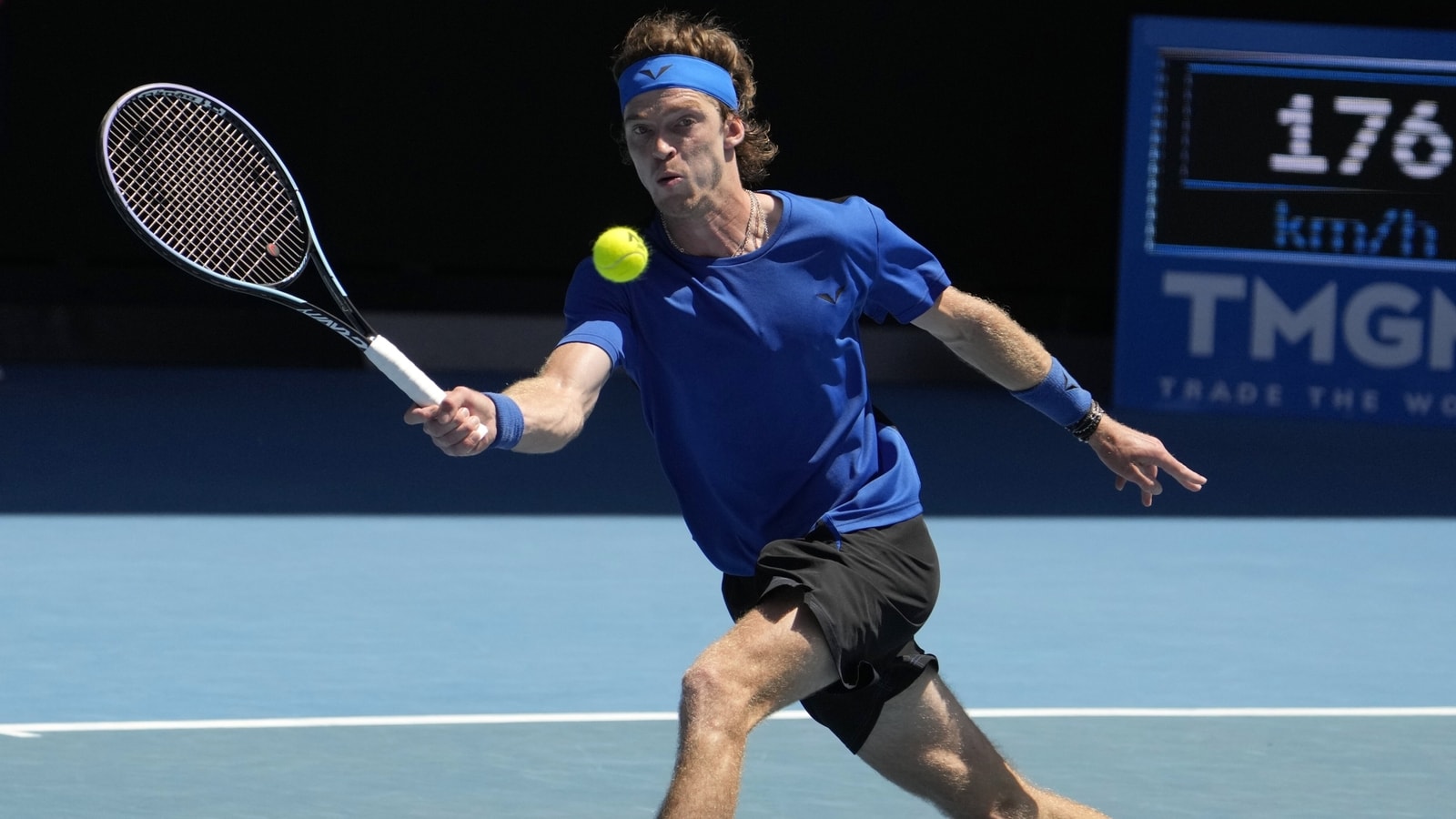 Fifth-seeded Andrey Rublev advanced to the fourth round of the Australian Open for the third time in four years with a 6-4, 6-2, 6-3 win over Dan Evans on Saturday.

“Every match I’m playing better and better,” Rublev said. “At the beginning of the year I lost a couple of close matches against really good players and lost a bit of confidence.”

Rublev, who will play either ninth-seeded Holger Rune or Ugo Humbert in the last 16, also thanked Evans for helping him out during the match by giving him a banana.

“I asked for a banana and they didn’t have any,” Rublev said. “Dan had asked for bananas earlier and had two and he just gave me one. He helped me with the energy.”

Belinda Bencic reached the fourth round for the first time since 2016 when she beat Camila Giorgi 6-2, 7-5 on Rod Laver Arena.

Bencic was broken when serving for the match at 5-4 but she broke in the following game and then served out to love for victory.

“I’m really happy I got a second chance to serve it out,” she said. “But overall I think it was a great match. (At 6-5) I just tried to relax. My coach (Dmitri Tursunov) was showing me relax (signals).”

Bencic, who plays either Aryna Sabalenka or Elise Mertens next, won the warm-up event in Adelaide before the Australian Open and has won eight matches in a row.

“I think a lot of credit goes to my coach,” she said. “We started working together at the end of October at the Billie Jean King Cup. We’re changing some things . . . I’m out of my comfort zone, so far it’s working well.”

Former top-ranked Karolina Pliskova also reached the last 16 with a 6-4, 6-2 win over Varvara Gracheva. Pliskova, who last made the second week in Melbourne in 2019, did not face a break point.

“My serve, it can be a really good weapon,” she said. “I’m not doing as much running from the baseline.”

Donna Vekic advanced to the fourth round for the second time in three years with a 6-2, 6-2 win over Nuria Parrizas Diaz of Spain. Vekic will meet either Czech players Marketa Vondrousova or Linda Fruhvirtova in the fourth round. 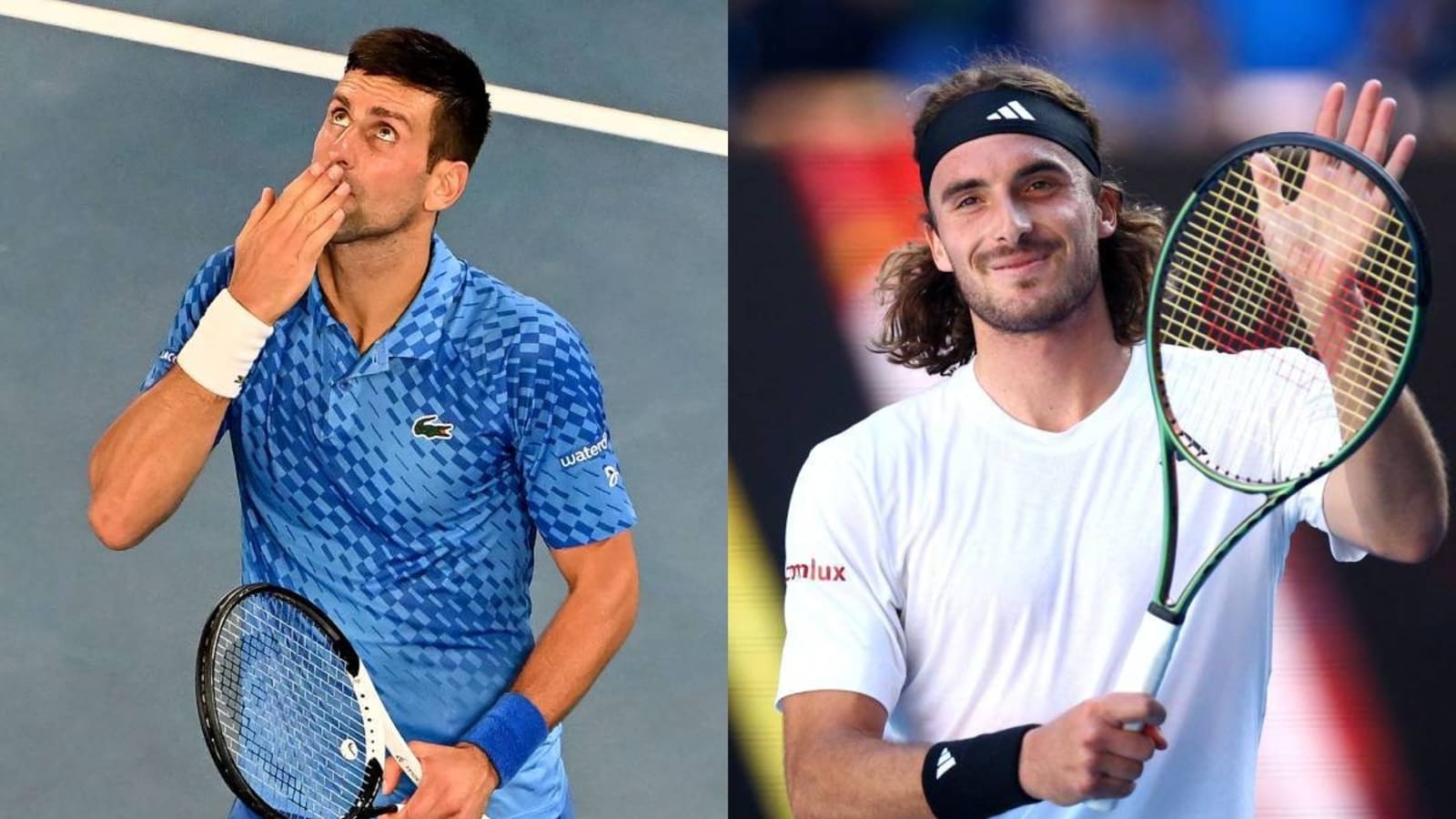 After being denied thrice in his career at the Rod Laver Arena – by Rafael Nadal (2019) and Daniil Medvedev (2021-22) – Stefanos Tsitsipas finally cracked the code this time to make this first ever final at what he calls his ‘home Slam’. But in a bid to walk home, to Greece, with the biggest prize of his career, Tsitsipas would have to take down the toughest barrier at the Australian Open, Novak Djokovic. Not only is the Serb a nine-time champion at the Melbourne Park, the two most telling stats that perfectly sums up his dominance in Australian Open is his 9-0 record in the final and his 27-0 record in this Slam since 2019. Not to forget, this is a man on a mission, eager to provide the fitting reply to the drama that unfolded last January and to level Nadal in etching his name in history.

Ahead of the blockbuster Australian Open final between nine-time champion Novak Djokovic and Stefanos Tsitsipas at the Melbourne Park, we take a look at the head-to-head record, key stats and records in line for the match…

Sunday’s tie will be their 13th ATP meeting between the two with Djokovic being the overwhelming favourite in the head-to-head record. Although it was Tsitsipas who had stunned the Serb in their very first meeting back in 2018 Canadian Open, and then again in the Shanghai Masters in the following year, Djokovic silenced the Greek winning all the next nine matches, including two at the Grand Slam level, both of which were at the Roland Garros.

Seven of these 12 meetings have been on hard court and Djokovic leads 5-2. However, Tsitsipas has won two of their three meetings on outdoor hardcourt.

BATTLE FOR NO.1 RANKING:

Three players – Casper Ruud, Djokovic, Tsitsipas – had set out to topple injured Carlos Alcaraz from the world no.1 spot in the ATP rankings. It is now down to the final two and with them reaching the summit clash, Alcaraz’s 20-week run ends on Monday as the winner of the Australian Open trophy will emerge as the new world no.1. The loser will be third in the world.

If Djokovic wins, he will ascend to the top spot in ATP rankings for the first time since June 6. He has already spent a record 373 weeks as World No. 1 across his career. For Tsitsipas, it will be first such feat in his career.

On reaching his 33rd Grand Slam final, already a record in itself in the Open Era in men’s singles tennis, Djokovic became the fourth oldest male player in the Open Era to reach the final at the Australian Open, younger only than Ken Rosewall (1972 and 1971), Mal Anderson (1972) and Roger Federer (2018). The 35-year-old presently has a 21-11 record in Grand Slam finals.

The win against Tommy Paul in the semis also took Djokovic past Andre Agassi’s long-standing tally of 26 wins as he now holds the record of longest men’s singles main draw winning streak at the Australian Open in the Open Era. Djokovic hasn’t lost a match at the Australian Open since 2019 and owns a 9-0 record in the final at the Melbourne Park.

This will be Tsitsipas’ second appearance in a Grand Slam final and he became only the youngest male player to reach the final at the Australian Open since Novak Djokovic and Andy Murray who faced each other in 2011.

Djokovic will be aiming for not one but two of Nadal’s most glorious feats in Open Era tennis. With the elusive trophy on Sunday night, Djokovic will level The Spaniard’s record tally of 22 Grand Slam titles, the most ever in men’s singles tennis. He will also become the second player after Nadal to win 10 titles at a single Grand Slam, joining the 36-year-old’s tally of 14 French Open hauls.

Lifting his maiden Grand Slam trophy, Tsitsipas will become the first singles player from Greece to achieve this feat. 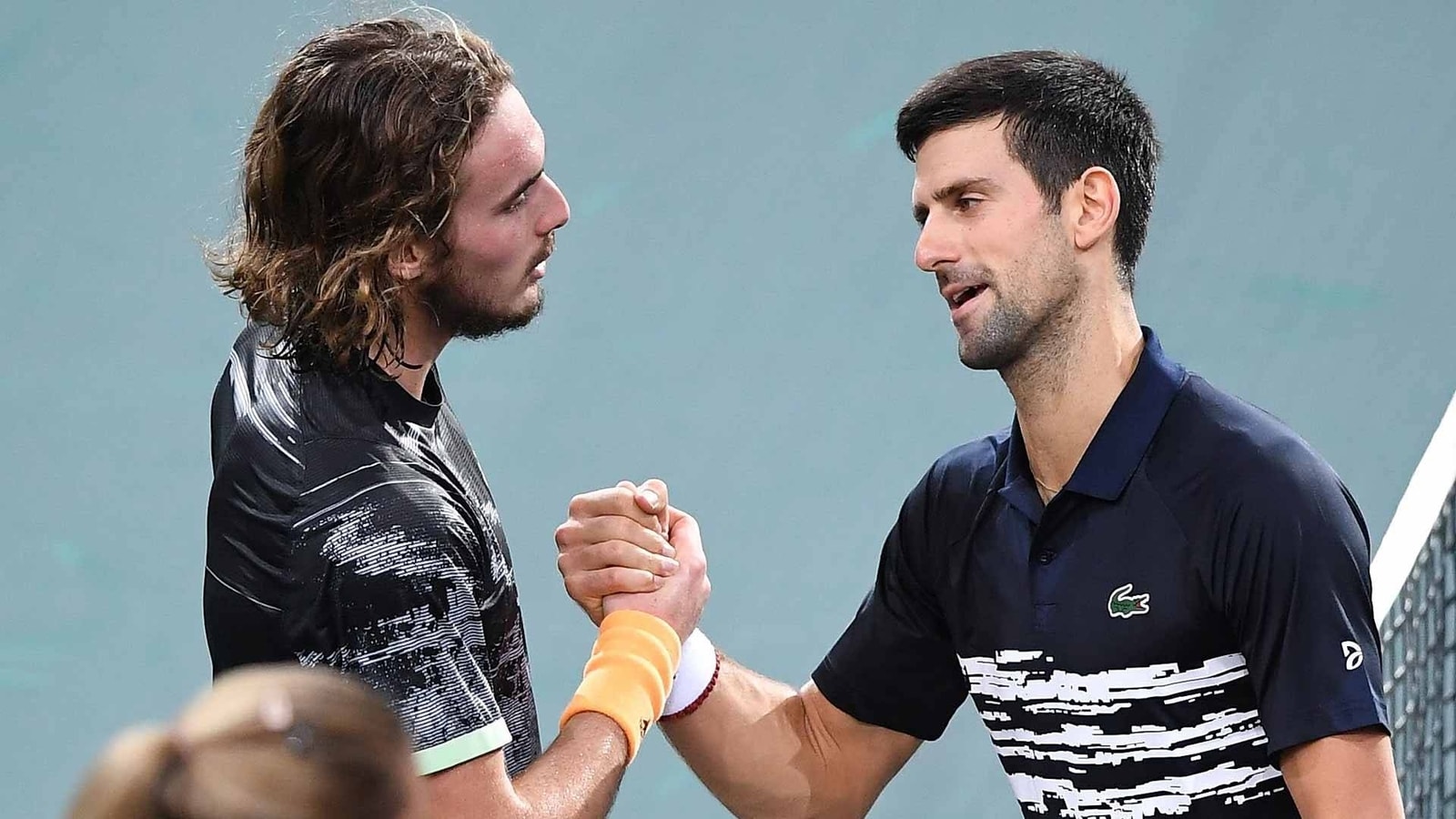 After thrashing Alex de Minaur in the fourth-round tie earlier this week, nine-time Australian Open champion Novak Djokovic was asked on the remainder of the draw. Of the seven men left, he narrowed it down to just Stefanos Tsitsipas, but for Djokovic, their only ever Grand Slam final meeting, at the 2021 French Open, had faded into oblivion.

“Tsitsipas [is] probably the most experienced guy out of all the quarterfinalists. He has played the final stages of a Grand Slam quite a few times. I think he has never played a final. Am I wrong?” asked Djokovic.

On being reminded by the journalist, he smirked and said, “That’s right. Sorry, my bad.”

In the context of their second Grand Slam final meeting, and first ever tie at the Australian Open, one could call it mind games. But for a player so has incurred just two losses in a Grand Slam since 2021 and only two on the tour since May last year, it could be rightfully down to the Serb’s sheer forgetfulness. Tsitsipas’ loss from two-set lead in Roland Garros is part of his indomitable Slam streak. Add to that Djokovic’s 9-0 record in the Australian Open final, 27-0 record in Melbourne Park since 2019 and 9-2 head-to-head record against the Greek and the 24-year-old has one of the toughest barriers to break in a bid to claim his maiden Grand Slam title.

But here stands Tsitsipas, the only man, of the 63 others, from his section of the draw, standing between Djokovic and his unprecedented 10th title at Rod Laver Arena, having reached the final by playing his career-best tennis. He sure has the weaponry to pull off an upset in the final, but against an opponent of this stature, Tsitsipas needs to be flawless with his skill, consistent with his aggression and poised from the inside. Ahead of the blockbuster meeting in the Australian Open final on the Rod Laver Arena, we take a tactical dive into the factors that could help Stefanos Tsitsipas beat nine-time champion Novak Djokovic…

When Karen Khachanov was asked about how Tsitsipas could beat Djokovic, moments after his semifinal loss to the third seed, the Russian was apt in pointing out that “nobody from that generation beat him, except Daniil I think in the US Open final,” before cheekily adding, “Maybe Stefanos has to call to Daniil to ask him what he did that day (smiling). I don’t know if that’s going to happen…”

It is unlikely that Tsitsipas would give the 2021 US Open winner a call, given their on-court tensions, during their rivalry meetings, which is well-documented. But it wouldn’t harm the Greek to keep aside his differences and revisit Medvedev’s winning strategy at the Flushing Meadows.

Bouncing back the thrashing he received from Djokovic in the Australian Open final at the start of that year, Medvedev decided to change his plan and overload the Serb’s Ad court with umpteen backhand-to-backhand exchanges, although much of that tactic also relied on the Russian’s ultra-flat backhand which gave Djokovic nothing to work with.

Pull a leaf out of Holger Rune’s book

The only player to have troubled Djokovic since last May, apart from Rafael Nadal in the French Open quarters, was the young Holger Rune. And it was Djokovic during his best run in 2022 and at one of his most favourite venues, the Paris Bercy. On back of titles in Tel Aviv and Astana, Djokovic had reached his eighth final in Paris Masters, hoping to add a seventh title to his name at Bercy. But his run was halted by an aggressive Rune who used a rather risky approach in scripting a turnround in the match and it was all down to his serve.

The Danish used the Serve + 1 forehand approach which handed his 16 of the 18 points. The strategy allowed him to unsettle Djokovic by taking time away from him.

One of the crucial factors that could alleviate Tsitsipas’ chances of beating Djokovic for the first time in 10 meetings is sheer aggression – willingness to keep the rallies short, not allow Djokovic from settling into long rallies and baseline exchanges, and come to the net as often as possible. 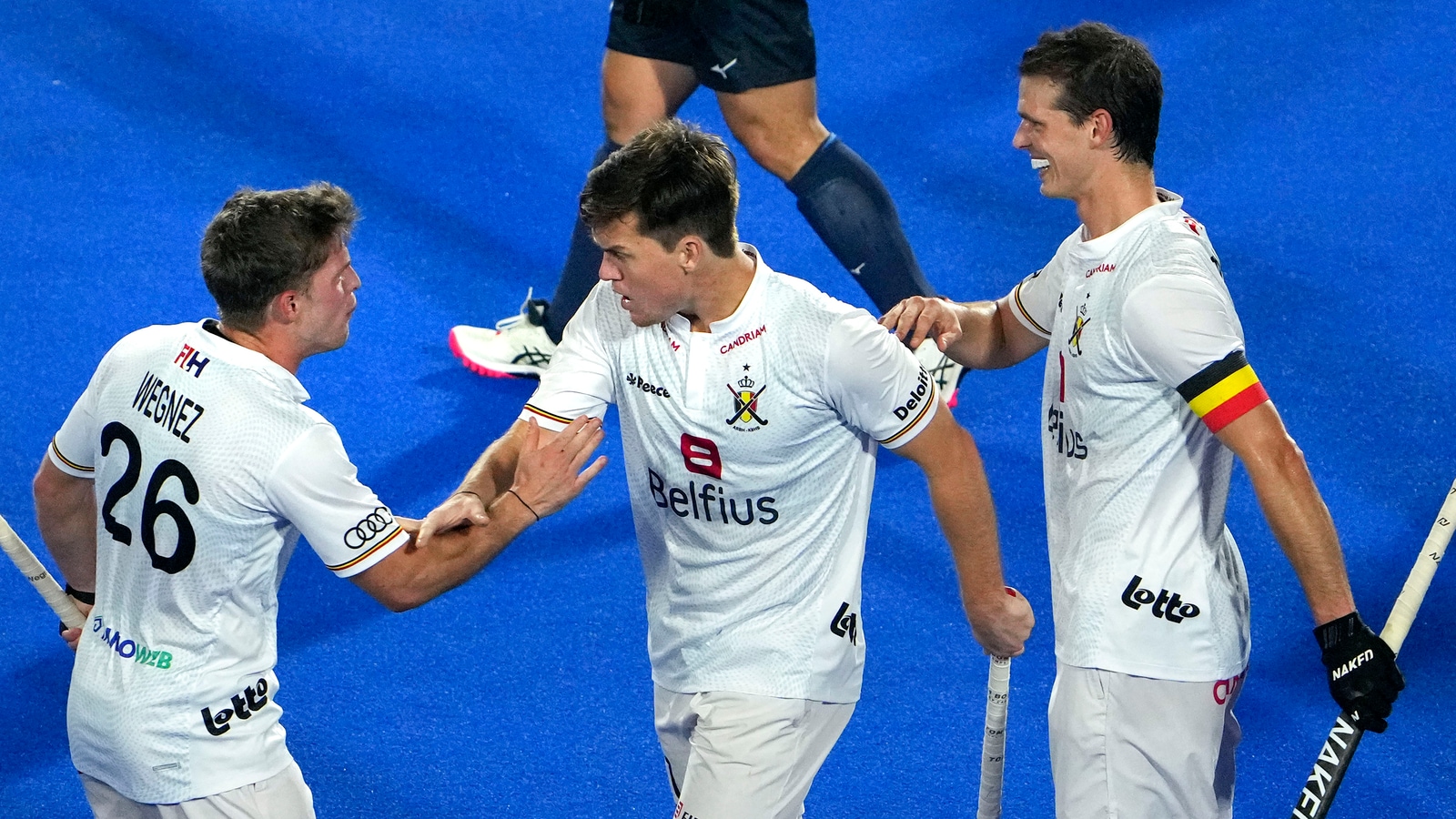 Germany will take on Belgium in the final of FIH Hockey Men’s World Cup 2023 on Sunday. Belgium are the defending champions and have won the title only once while Germany have done it twice. A nail-biting contest is on the cards as both Belgium and Germany have been undefeated in the tournament thus far.

Belgium are currently ranked No.2 in the world while Germany are just one spot below at No.3. Going by recent head-to-head record, Belgium have the upper hand as they have beaten their opponent 10 times in 16 matches that they played against each other since mid-2017. The two teams squared off in the group stages of the ongoing tournament and drew 2-2.

Both teams have got some brilliant players who have delivered at the big stage. Belgium’s Tom Boon is the second highest goal scorer in the tournament, having scored seven goals. While Germany also have Niklas Wellen who has found the net on six occasions.

Here are the live streaming details

When will the Germany vs Belgium Men’s Hockey World Cup 2023 final take place?

Where will the Germany vs Belgium Men’s Hockey World Cup 2023 final be played?

The Germany vs Belgium Men’s Hockey World Cup 2023 final will be played at the Kalinga Stadium in Bhubaneswar.

What time will the Germany vs Belgium Men’s Hockey World Cup 2023 final start?

Where can I watch the live streaming of Germany vs Belgium Men’s Hockey World Cup 2023 final?

The live streaming of Germany vs Belgium Men’s Hockey World Cup 2023 final will be available on Disney+ Hotstar app and website. FanCode will also be streaming the matches in India for free.