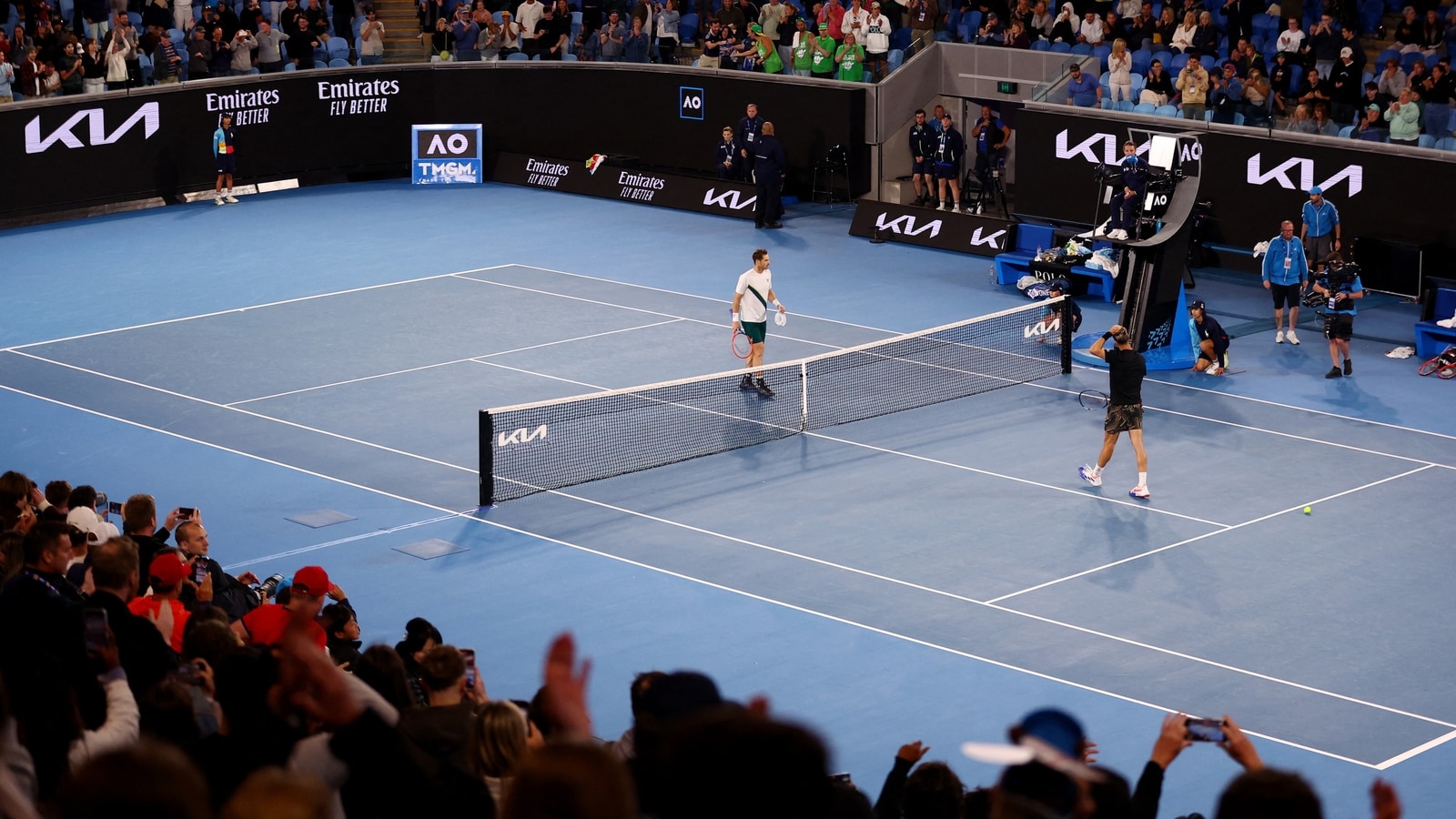 Between Andy Murray finishing his second-round match at the Australian Open and returning to Melbourne Park for a training session, there was a gap of less than eight hours.

The issue here isn’t how early he checked in again, but how late he’d checked out.

The clock had ticked past 4 am on Friday when Murray completed his epic five-set turnaround against Australian Thanasi Kokkinakis, a five-hour-45-minute tussle that kicked off at 10.20 pm on Thursday.

The issue here isn’t how long the match lasted, but how late it began.

In modern tennis where the length of contests have been directly proportional to the frequency of baseline exchanges, late-night finishes are increasingly becoming a trend. More so at Grand Slams, with three of the four having separate night sessions.

At the 2022 US Open, the five-set quarter-final between Carlos Alcaraz and Jannik Sinner finished at 2.50 am. A few months prior to that at Roland Garros, Novak Djokovic and Rafael Nadal came together at the net after their quarter-final at 1.15 am, a time they both agreed was too late. In an ATP tournament in Acapulco last year, Alexander Zverev and Jenson Brooksby played the last point at 4:54 am.

Late night/early morning finishes continue to keep players awake in the season-opening Slam Down Under. On Friday going into Saturday in Melbourne, Zhu Lin defeated Maria Sakkari at close to 2 am. By the time Marketa Vondrousova beat second seed Ons Jabeur way past 1 am, all she needed was “some sleep”.

Murray still had time for some humour after the clock on his match stopped at 4.05 am—it was the second latest Slam finish after Lleyton Hewitt and Marcos Baghdatis at the 2008 Australian Open (4.34 am)—but he too called it “a bit of a farce”. The great Martina Navratilova had also tweeted on the “crazy”, adding “no other sport does this”.

What’s also crazy is tennis pros dragging their body back on court for a match merely hours after. After his 4am shift, Murray returned for some hitting at around 1pm on Friday to prepare for his third-round match scheduled on Saturday at 7pm. Not so much prepare, but recover.

“It is phenomenally demanding, physically and mentally,” Ramji Srinivasan, the former strength and conditioning coach of the Indian cricket team, said of the challenges for tennis players dealing with these late-night finishes. “In terms of strength and conditioning, you can’t do much here. Recovery becomes the most integral part of it. And you have to adjust your body rhythm accordingly. It’s a huge ask for any athlete.”

More than the athlete himself, the role of Murray’s support staff gains significance in the immediate aftermath. Which would include, Ramji said, a good massage, contrast bath, warm-down drills to calm the adrenalin and simultaneous post-match meal. “Meal pattern also changes (due to the 4 am finish). That is your fuel, and if you don’t have enough fuel, you won’t be able to sleep properly. And good sleep is one of the most important and underrated protocols in recovery. Everything is linked.”

“His team will have to do a phenomenal job to give him what is required to recover for the next match,” Ramji added.

That’s where the after-effects of the all-nighter could well spill over into the next round and beyond, impacting the quality of both the player and the contest. For the 35-year-old Murray who has already spent more than 10 hours on court for his two matches, that is a realistic risk against Roberto Bautista Agut on Saturday.

“It can affect the players going into the next round and at this stage, at such a high level, that stuff is really important, especially for someone like Andy who needs time to recover and physically feel right for the next round,” Jessica Pegula, the women’s third seed who is part of the WTA Players’ Council, said. “I definitely think it needs to change and trust me, it is definitely something we want to discuss. But (it) also has to come from men’s side.”

And yet, these late finishes keep coming. That’s primarily because broadcasters fancy the prime time, and the Grand Slam organisers their two-match night sessions on show courts. “If you just put one match at night and there’s an injury, you don’t have anything for fans or broadcasters,” Craig Tiley, the Australian Open tournament director, said.

Related Topics:Australian Open
Up Next

‘I wasn’t in the zone’: Medvedev after defeat to Korda in Australian Open | Tennis News

Wrestling with the big problem in Indian sport