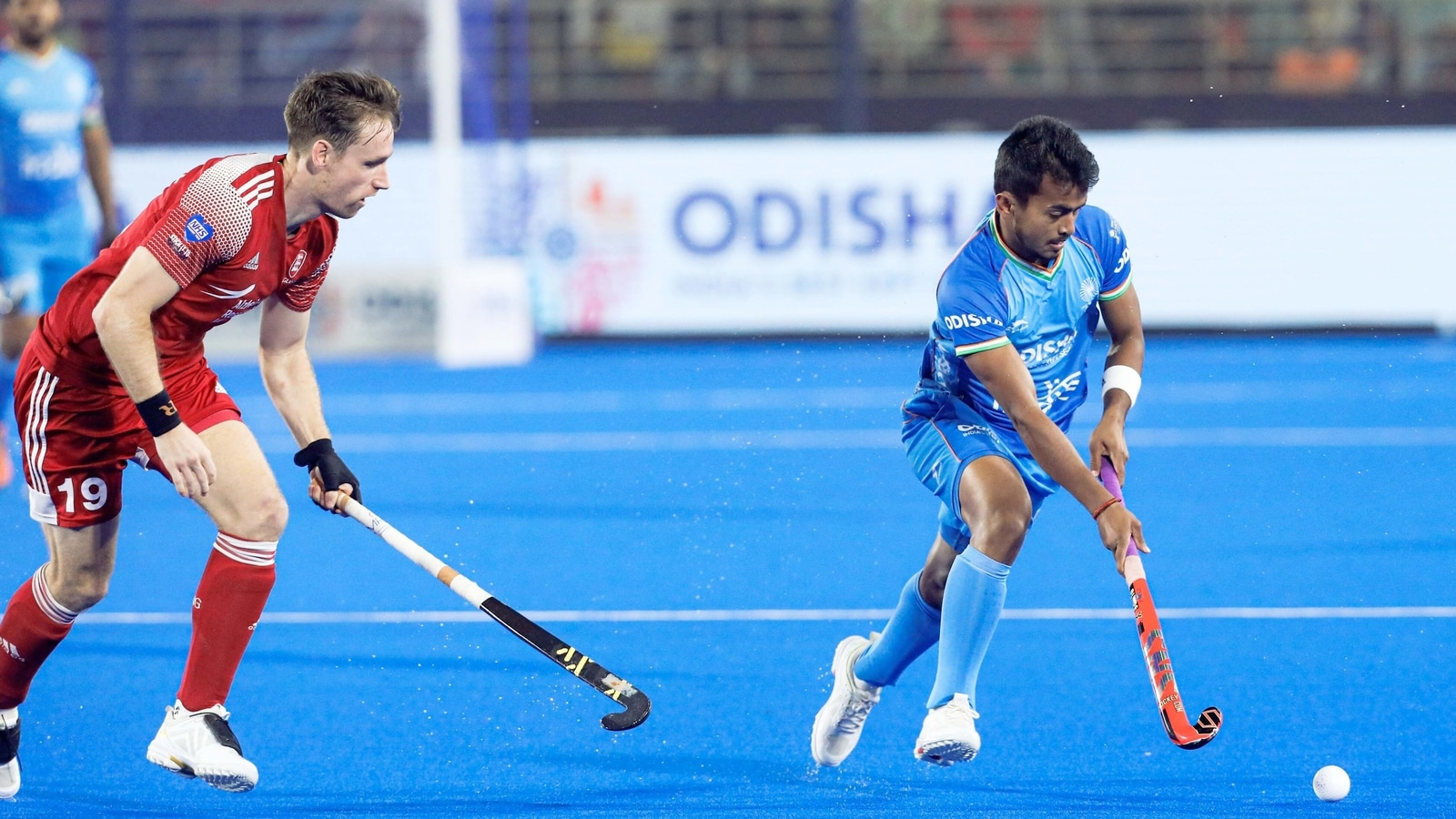 Attacks, tackles, injuries, catch-your-breath moments with 21,800 spectators going wild. India’s second Pool D World Cup encounter against England had all the drama of a tightly contested game, except that the main ingredient was missing – goal.

The two evenly matched and ranked teams fought every second of the 60 minutes, pushing each other from one end to the other on the new blue turf of the Birsa Munda Hockey Stadium but failed to convert any of their chances to draw for a point each here on Sunday.

Also Read | For India, the most important thing is we hit the ground running: Graham Reid ahead of Hockey World Cup 2023

While the Indian forwards could not convert their nine shots on goal, the defensive setup was on top of its game. Like against Spain on Friday when they maintained a clean sheet. It made sure the hosts haven’t conceded at this World Cup. Chief coach Graham Reid’s extensive work on being frugal in defence came to the fore as India managed to save an impressive eight penalty corners.

After the first two round of matches, world No 5 England and India are both on four points but the former lead the group with a better goal difference. Spain are third with three points after a 5-1 victory over debutants Wales earlier in the day. While the top-placed team will qualify directly for the quarter-finals, the second and third teams will move to the crossovers for a last eight berth.

India started brightly with a shot on the English goal in the first minute but England seized control thereon, pummelling the Indian defence with attacks. The English earned five penalty corners (PC) in 90 seconds in the first quarter with Nick Bandurak taking the first two and Sam Ward the next three.

With first rusher Amit Rohidas on the bench, it was down to Manpreet Singh to take up the responsibility. The former India captain ran towards the flickers with no fear, denying the English drag-flickers angles or variations.

“At this level we play fast hockey. It’s always concerning when you give away that many short corners. Both teams will have that feeling. When you have a 0-0 draw, both will feel there is something we missed. I was pleased with the fight and commitment we showed. It was a very nice game to watch, high-skilled hockey. Holds both teams in good stead for later in the tournament. Both teams are exhausted. It was a telling match,” said Reid.

India skipper Harmanpreet Singh, who is yet to fire in this World Cup, wasted the only PC chance India got in the dying minutes of the first quarter.

Goalkeeper Krishan Pathak, who alternated quarters with PR Sreejesh, impressed at the beginning of the second quarter, making a fine save as England earned two more PCs in the 16th and 20th minutes. This time, local boy Rohidas got into the act with India saving all seven English attempts from set-pieces.

After 20 minutes of playing the game in their own half, world No 6 India finally started to press. A good run by Mandeep Singh with the aid of Hardik Singh gave India a chance as Reid’s boys managed to earn three back-to-back PCs.

India were wasteful in all their PCs – shared by Harmanpreet and Rohidas – but the tide had turned as India started dominating possession. Both Manpreet and Hardik had a couple of attempts but were unable to convert thanks to goalkeeper Oliver Payne – he was named Player-of-the-Match – as the game went into half-time 0-0.

After an enthralling light and laser show during the break, the teams returned with England looking unsettled. While it rained PCs in the first half – 11 – the second half was dry with neither outfit earning a PC in the third quarter. Both teams became cagey though India attempted a couple of times with Payne coming to England’s rescue.

Hardik and Mandeep had their chances but to no avail. Like against Spain, Hardik made solo runs towards the English goal but ended up injured when he clashed with an England defender in the 55th minute and had to be taken off. Manpreet too collided accidentally with the ball hitting the back of his neck, but was back on his feet soon.

The contest was quite clean with three green cards – one for England and two for India – unlike the group stage game at the Birmingham Commonwealth Games which ended in a dirty draw with several yellow cards handed out.

There was drama at the end yet again as India survived a scare with 19 seconds left when England earned their eighth and final PC. Bandurak flicked it to his right but Surender Kumar saved with a block on the line.