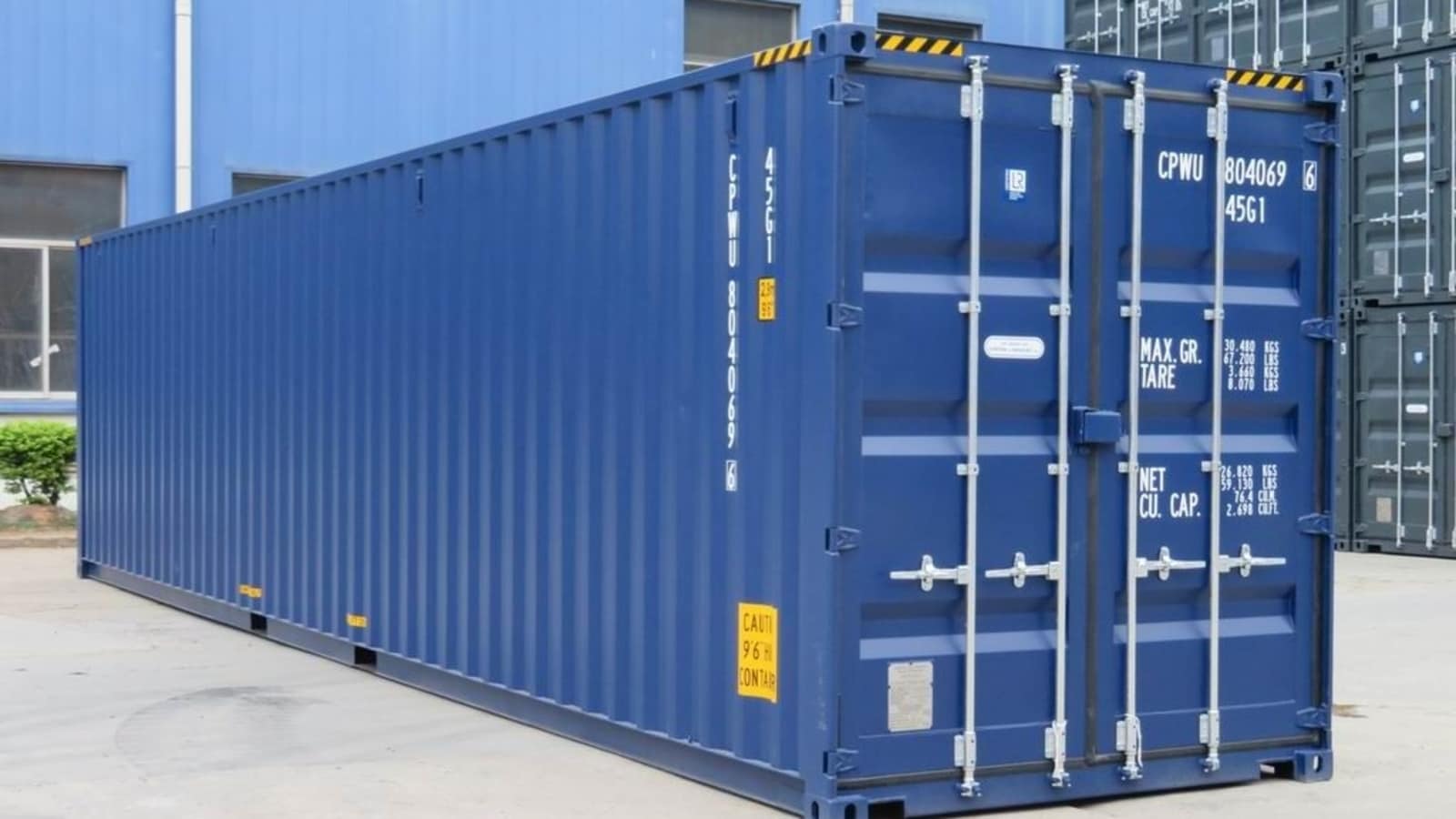 “During the Covid-19 pandemic, there was a huge shortage of shipping grade containers globally. Many containers were tied up at ports, storage facilities & vessels world-wide due to government restrictions and regulations,” an official statement stated. It added that the rising demand, port congestions, and closed manufacturing operations made the shortage worse.

This resulted in increase in container freight rates phenomenally across the world imposed by shipping lines. This badly impacted India’s export import supply chain, the statement claimed adding that the country requires about 3.5 lakh containers every year but there is no container production, thus had to depend mainly on China.

It further said that container manufacturing was viewed as the solution to container shortage that could eliminate the dependence of India on China. “The challenges faced were not only on the economies of scale in which India produces these containers, but also on the availability of raw material used in its manufacture, the corrosion/weather resistant steel,” it stated.

To study the problem and chalk out a plan to create capacity for manufacturing shipping grade containers, an inter-ministerial panel was set up on the directions of the Prime Minister’s Office in June. During interactions with industry stakeholders, the statement said, the committee learnt that the specific steel used for making containers was not available in the Indian standards.

“The matter was brought to the notice of Bureau of Indian Standards (BIS), which has now amended its Indian standard (IS 11587:1986), to fulfil the demand of domestic container manufacturers used for domestic and EXIM trades and introduced new grade WR-Fe 490H equivalent to Corten-steel,” it said.

The statement read, “As per Government guidelines, Bokaro Steel Plant as a leading steel manufacturer, obtained the license from BIS. Bokaro Steel Plant regularly produces weather resistant steel “SAILCOR” in hot and cold rolled coils, plate and sheet form.” It added that this is an indigenous equivalent grade for CORTEN Steel that is used by Indian Railway to manufacture weather resistant structural/wagons. “As an import substitute, production of these grades at Bokaro Steel Plant will strengthen the vision of Atmanirbhar Bharat,” the statement stated.

Apple HomePod is back, with the promise of better sound and more intelligence 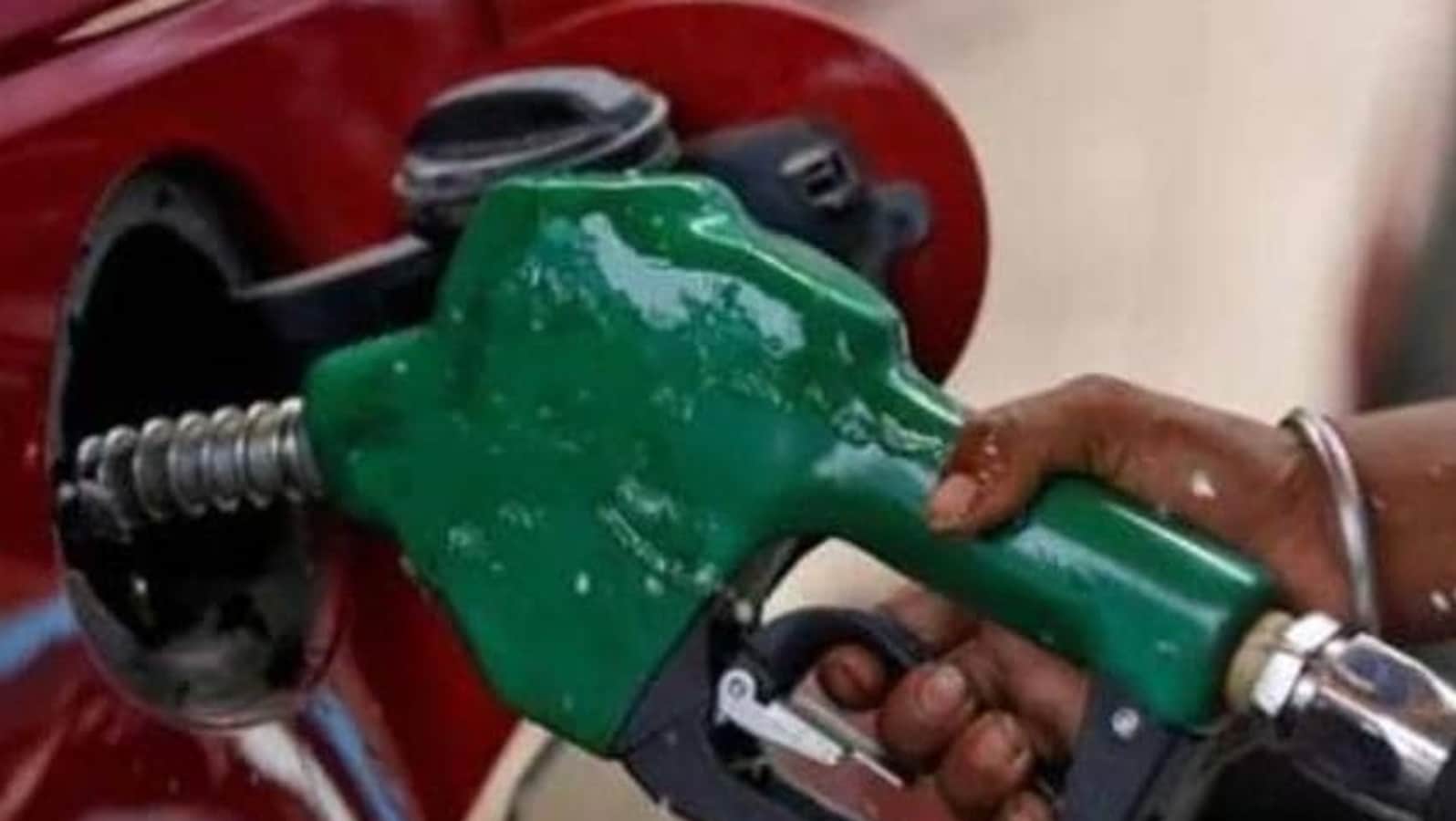 Petrol and diesel prices are unchanged on February 1, the day of the presentation of the annual Union budget. The previous country-wide revision to fuel prices was made on May 21 last year; this, therefore, means that across the country, these rates have been steady for more than eight months now. 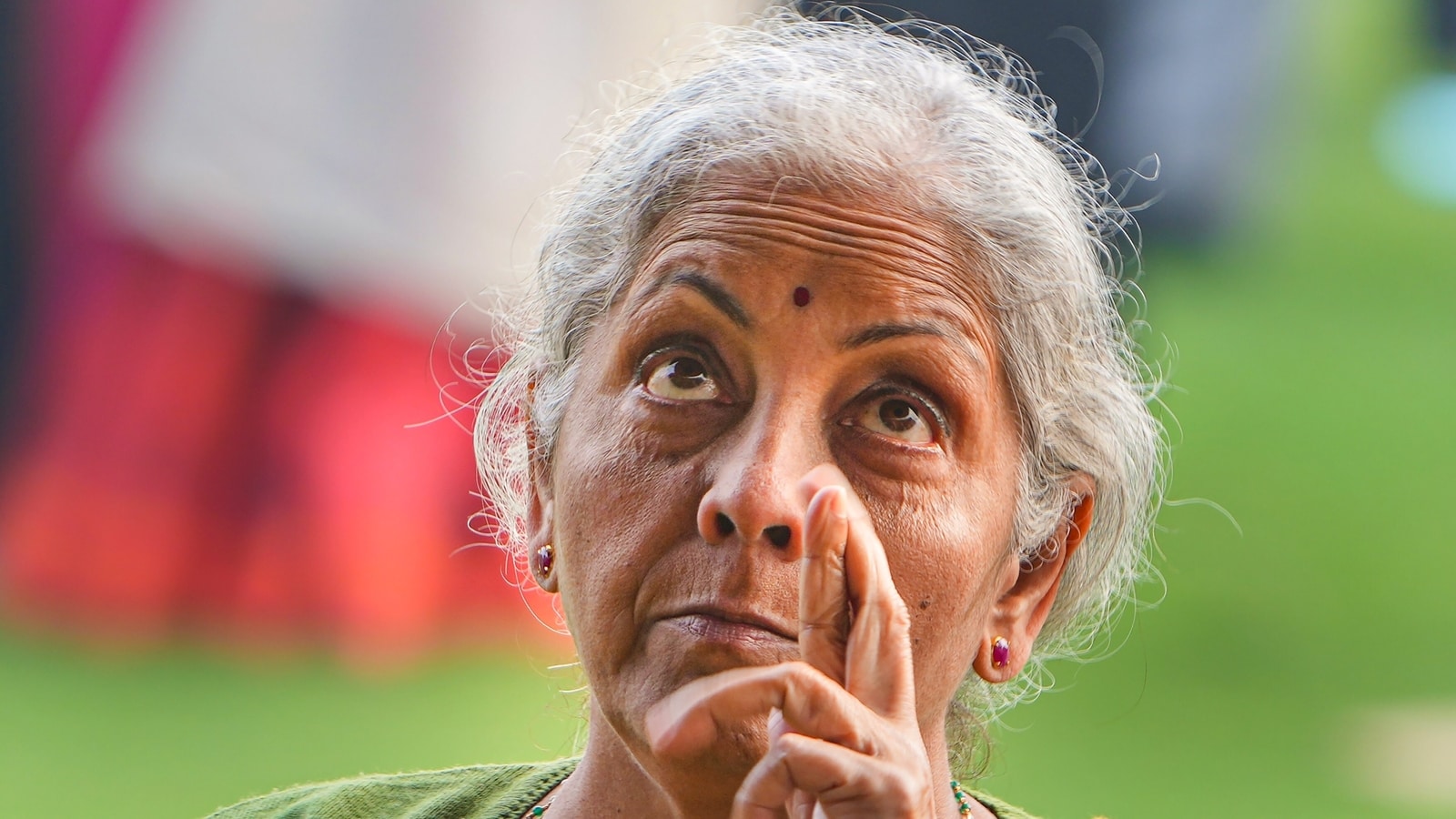 From 11am in Parliament, Sitharaman is expected to announce a spending plan of over $544 billion in the financial year starting April to boost employment, fund social welfare and provide perks for manufacturing.

Bloomberg reported that Sitharaman may make a few changes to income-tax slabs to provide relief to the middle class and increase the spending on the poor through programmes such as rural jobs. The Union Budget 2023 may also focus on ramping up financial incentives for local manufacturing.

> There are expectations that Sitharaman would put some money in the pockets of taxpayers. She is also likely to raise import duties on items such as private jets, helicopters, high-end electronic items and jewellery to encourage domestic manufacturing.

> The budget may see production-linked incentives getting extended to sectors such as shipping containers and toys.

> The focus is expected to be on increasing the number of nursing and medical colleges, introducing HPV vaccine in the National Immunisation Program and enhancement of Pradhanmantri Jan Arogya Yojana (PMJAY) coverage. Reports indicate that the health ministry has proposed the inclusion of many other requirements and its expected that some of them will be included in Budget 2023-2024.

> The Budget 2023 is a much-anticipated event for the real estate sector in India. Industry experts and stakeholders have high expectations from the government as they hope to see a number of reforms and initiatives that can help boost the real estate market and encourage investment in the sector.

> The budget session of the Parliament began on Tuesday with President’s address. This year’s budget session is going to have 27 sittings till April 6 with a month-long recess to examine the budget papers. The first part of the session will conclude on February 13. Parliament will reconvene on March 12 for the second part of the Budget Session and conclude on April 6.

> The Union Finance Minister, Nirmala Sitharaman on Tuesday tabled the Economic Survey for the Financial Year 2022-23.

> The Economic Survey said India’s economic recovery from the Covid pandemic is complete and the economy is expected to grow in the range of 6 per cent to 6.8 per cent in the coming financial year 2023-24. This is in comparison to 7 per cent this fiscal and 8.7 per cent in 2021-22.

Number Theory: What does the Economic Survey tell us about the Budget? 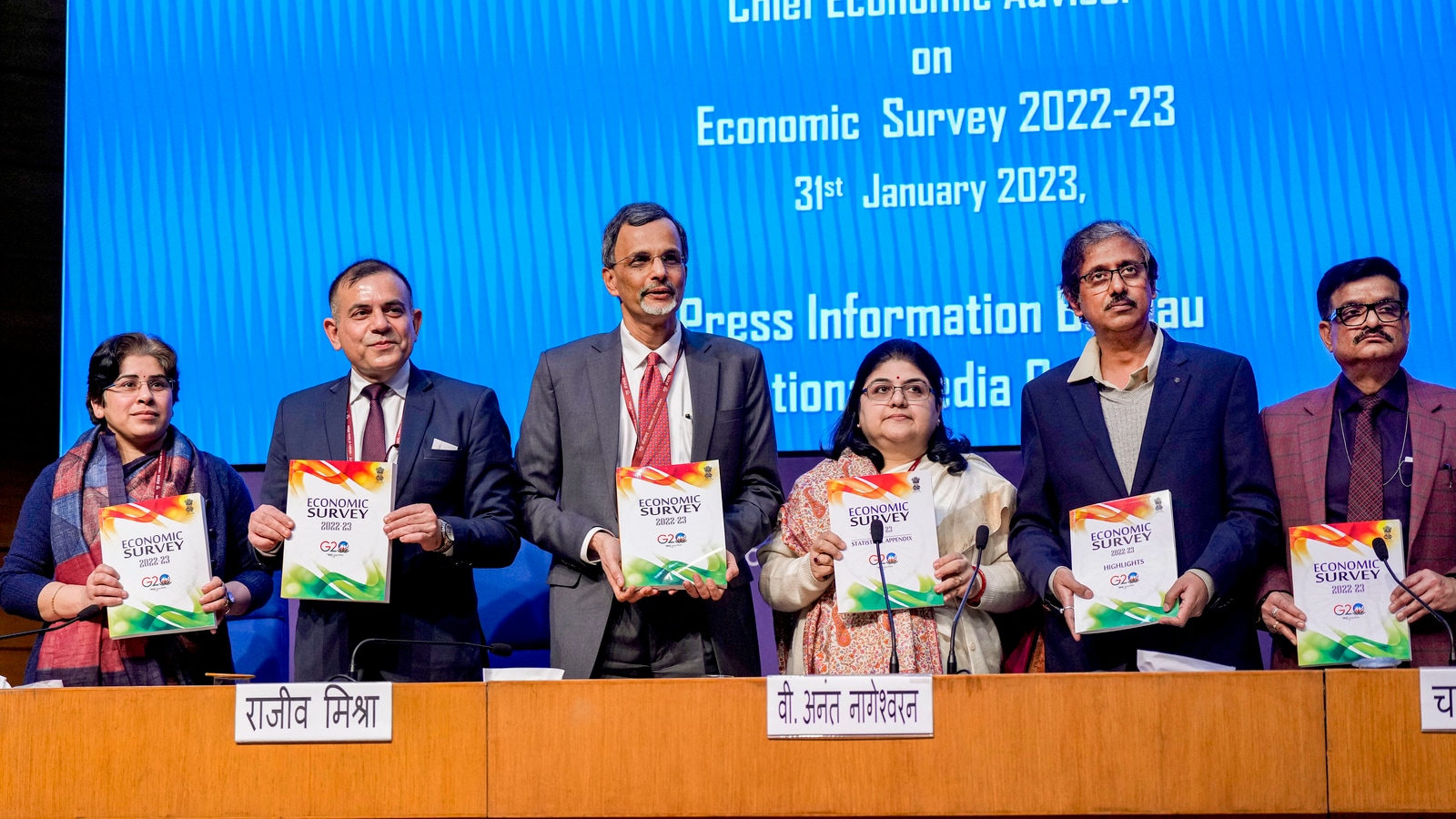 What does the 2022-23 Economic Survey — it was tabled in Parliament on January 31 — tell us about the Union Budget? Here are four things that stand out.

The survey has projected a nominal growth rate of 11% for 2023-24. Real GDP growth, according to the survey, is expected to be in the range of 6-6.8%. The first advanced estimate of GDP, which was released by the National Statistical Office (NSO) earlier this month, put nominal GDP growth in 2022-23 at 15.4%. This means that nominal growth is expected to slow down significantly in the next fiscal. Unless there is a significant increase in tax buoyancy – the change in tax collections per unit change in GDP – growth in tax revenues in 2023-24 will likely be lower than what it was in 2022-23. To be sure, the moderation in nominal growth is more because of a decline in inflation rather than a fall in real GDP growth, which as per survey’s baseline projection is likely to be 6.5% next year.

Last year’s Budget estimated fiscal deficit for 2022-23 at 6.4% of GDP. While the Revised Estimate (RE) for fiscal deficit will presented in tomorrow’s budget (and even RE numbers are liable to changes) the survey does drop a hint that the government will be able to achieve its fiscal deficit target for 2022-23. This, the survey suggests, has happened because of buoyant growth in direct taxes and Goods and Services Tax (GST) and limited revenue expenditure, “which should ensure the full expending of the Capex budget within the budgeted fiscal deficit”.

ALSO READ: After ‘smart recovery’ from Covid, what do MSMEs expect from Budget 2023

Focus on disinvestment and asset monetisation programme will continue

One area where the budget has fallen significantly short of its targets in the recent past is disinvestment. For example, the Budget Estimate (BE) for disinvestment receipts in the 2021-22 Budget was ₹1.75 lakh crore, which was brought down to ₹78,000 crore in the RE numbers for 2021-22. BE numbers for 2022-23 put disinvestment receipts at ₹65,000 crore. While the RE numbers for 2022-23 are likely to be lower than this number, the survey suggests that the government’s disinvestment push is likely to continue. The survey, in fact, has tied disinvestment and the asset monetisation programme of the government to the capex tilt in government spending. “A capex thrust in the last two budgets of the Government of India was not an isolated initiative meant only to address the infrastructure gaps in the country. It was part of a strategic package aimed at crowding-in private investment into an economic landscape broadened by the vacation of non-strategic PSEs (disinvestment) and idling public sector assets”, the survey said.

Here the survey has said more by way of omission than commission. Chapter two of the survey, which talks about India’s medium-term growth prospects, makes an argument that India is set to leapfrog into a sustained high growth trajectory in 2023-2030 as a result of policy driven reforms during the 2014-2022 period. The growth boom, the survey argues, was delayed because of “balance sheet stress caused by the credit boom in the previous years and secondarily due to the one-off global shocks that followed”. “Once these global shocks of the pandemic and the spike in commodity prices in 2022 fade away, the Indian economy is well placed to grow faster in the coming decade”.

To be sure, it is to be expected that the Economic Survey – it is after all a government document – will paint a comforting picture of the state of the economy. However, this year’s survey has made a larger argument to suggest that the concerns of a K-shaped recovery in the economy where the rich (both firms and households) have done better and emerged as the primary driver of the growth revival, are unfounded. This also means that the government does not see any need to support the aggregate demand of the non-rich, which would entail larger spending on the revenue and not just capital account.

This has in fact been the driving philosophy of the budget in the post-pandemic period, and the survey’s line of argument suggests that it will continue to be the case. While such as approach has helped India’s macroeconomic fundamentals, keeping the fiscal deficit and debt-GDP ratio in check, its exact implications for long-term growth are still to be seen. That India does not have a Consumption Expenditure Survey after 2011-12 has only made this debate more difficult to resolve.